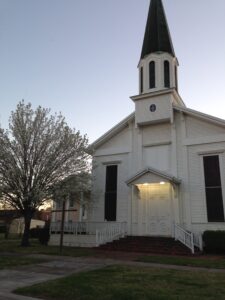 When the Patterson(ville) church was formed in the mid 1800's, its pastor made trips to Morgan City to hold services.  A congregation developed in Morgan City by 1860 and was meeting with other Protestants in a church/school building erected by the town.  By 1875, a minister (Rev. A.E. Clay) was appointed to serve the Morgan City and Berwick areas.  The Methodist Episcopal Church, South purchased a lot (No. 8, Square 15) for $150.50.  The cornerstone for the Pharr Chapel sanctuary was laid on April 4, 1878.
The first parsonage was built in 1880 on a lot next to the church that had been purchased on May 4, 1879 for $150.  In 1912, the original two-story parsonage was torn down and replaced by another two-story parsonage on a lot donated by the Pharr family.  In 1954, the second parsonage was torn down and replaced by a one-story home.  The present parsonage in the Lakeside Subdivision was built in 1975.
In 1916, Mr. John A. Pharr donated a pipe organ, which he played until his death in 1955.  In 1956, his daughter Elizabeth had the organ completely renovated.  The interior of the sanctuary was also redecorated at this time, which included 4 brass chandeliers donated by the Bass family.
From 1926 to 1933, the pastor at Pharr Chapel would take a "missionary boat", the Elizabeth James and minister to the rural areas along the bayous. The mission was discontinued due to financial difficulties brought on by the Depression.  Rev. D.B. Boddie resumed the mission work in 1940. 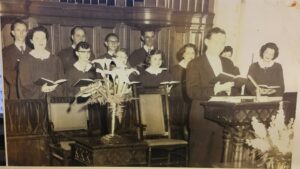 Under the leadership of Rev. E.W. Day, the education building was constructed in 1936, with the second story added in 1948 (under the leadership of Rev. E.L. Tatum).  In 1960, the Bass family provided memorial funds to furnish a chapel in the building.  At the same time, the educational building was enlarged, renovated, and attached to the sanctuary.
In 1965, the sanctuary received a face lift, which included carpeting and new pews.  But later that year, disaster struck when the steeple was destroyed by hurricane Betsy.  The steeple was rebuilt by 1966 at a cost of $30,000.  In the 1960's and 70's, several properties were purchased on the block to allow for future expansion.
During the 1980's the educational building was given a complete face lift as a result of a congregation-wide effort to further the impact of ministry done through this facility.
When Morgan City and the surrounding areas were struck by Hurricane Andrew in 1992, the sanctuary suffered major damage.  Lightning during the storm split the steeple apart; it was damaged beyond repair.  In addition to the destruction of the steeple, many windows were blown in and the front of the sanctuary was partially pulled away from the building.  The subsequent water damage ruined the carpeting, many pews, hymnals, and other things in the sanctuary.  Damage to the educational building was slight.  After about six months and nearly $125,000 in repairs, everything was restored and fully repaired.
Pharr Chapel celebrated 125 years during the weekend of May 17-18, 2003.  Bishop William Hutchinson of the Louisiana Annual Conference presided at the celebratory services.  Many current and former members were in attendance, as were many former pastors and/or their spouses.  It was truly a glorious time to celebrate all that God has done through this congregation.
We are very grateful to God for the rich history of our church, and look forward to building upon the vision laid out over 140 years ago to minister to the Morgan City area.
The best way to honor our past is to carry the vision forward. 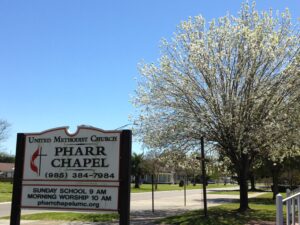